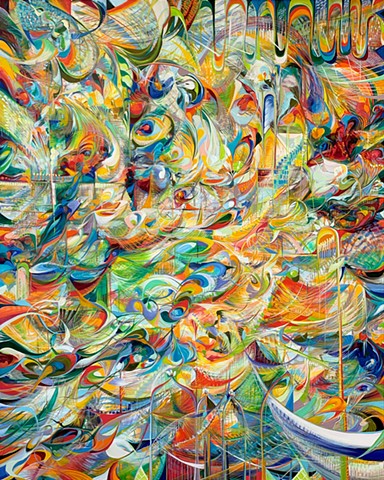 This is the third painting in my ‘There is a Universe Inside of You’ series and the most recent evolution of the ideas that I have been interested and developing for the past decade in my work, particularly around dualities of dark and light, geometry and fluidity, surface and deep space, culminating in a compositional harmony where the disparate parts click into a cohesive hum. This alchemy of chaos into peace is a visual philosophical metaphor relating to our power to do so everyday through perspective, discipline and intention. The iconography and mark-making was inspired by a range of influences that I have been cultivating over the years: a rectilinear and geometric scaffolding inspired by architectural elements found in ancient sacred architecture--arches, stairways, bridges, ladders, porticos, long pathways--drawing the eyes into the composition and allowing for a multitude of individual moments of contemplation, similar to the built environments that inspired the marks. These architectural scaffoldings are superimposed with structures found in nature, both botanical and neural: DNA/RNA strands, glial cells, axons, dendrites, capillaries, plant forms, as well as biomimicry of patterns and irregularities found in nature relating to water patterns, topography and tectonics, wind/sound waves, etc. This combination of sacred architectural forms and natural scientific forms create a universe suggesting the fusion of spirituality, science, and nature as one, where each element is necessary for the completion of the whole. The forms intentionally exist along the threshold of abstraction and representation, offering space for interpretation and encouraging an active viewer to complete the image and continue to discover within the work, choosing to feel energized by the whole, or calm and meditative by focusing on specific areas. Ultimately, as with the other two paintings in this series, this piece is about transforming the yin and yang of life into a positive, intentional space, and about the infinite universe of possibility within each of us.